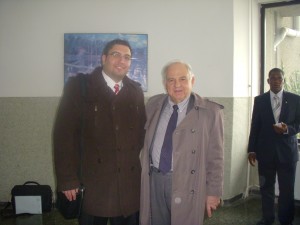 Dr. Ozan Örmeci and Prof. Dimitri Kitsikis at Bilkent University on 9 March 2012
My doctoral thesis submitted to the Sorbonne, in Paris, and published by the Presses Universitaires de France, in 1963, 540 pages, bore the title, Propaganda and Pressure Groups in International Politics. Now, I am amazed since the time I finished my thesis, at the extraordinary progress of American propaganda and psychological warfare. The USA have used since the Helsinki Conference on Security and Cooperation in Europe (1973-1975) all means of fake information through the Media and the Human Rights campaigns to provoke street uprisings baptized colored or spring revolutions, using armies of mercenaries to provoque civil wars, so much that half of the work of destabilization of regimes is done not through armaments but through propaganda. Washington has used religion, Catholicism in Poland and Islam in Afghanistan to overthrow the Soviet Union. It used the Internet, Facebook, Twitter, e-mails, blogs to create unrest, often with great success. It used monetary destabilization to attack the euro and ruin the progress of the European Union. Anyone that has dared to question the supremacy of the American dollar, be it Japan in the past or the European Union today has been badly hit by them. The Empire before dying will commit suicide that will take with it in the grave hundreds of millions of lives all over the planet, because America is struck by the vision of Armageddon.
UPA: Professor Kitsikis, two elections were held in Greece, in May and June 2012. How do you see Greece’s future in terms of relations with European Union and relations with Turkey?
Prof. Dimitri Kitsikis: I think that Turkey was very lucky not to have been accepted in the European Union, otherwise it would have had the fate of Greece. Greece’s industry, agriculture and finance were totally ruined by their entrance into the prison of the peoples, under German dominance, that represent the European Union, a repetition of the European Holy Alliance of 1815-1823. Greece’s interest is to abandon the European Union and the euro and go back to its national currency, under the umbrella of the American dollar. Such an outcome will allow the Greek-Turkish rapprochement of both economies and their political union. Later on, a common Greek-Turkish currency could be set up, replacing both the drachma and the Turkish lira. The present political trend in Greece goes towards such a future development. Nevertheless, one has to be very careful to avoid provocations from both sides that could be explolited by the enemies of a Greek-Turkish Confederation and plunge the region  into a Greek-Turkish war.
UPA: Professor you worked in the early 1990s as an adviser to the former President of the Republic of Turkey Turgut Özal. Could you tell us about Özal’s personality and your relations? How do you see the latest discussions about the death of Özal?
Prof. Dimitri Kitsikis: I consider Özal as the most important leader the Republic of Turkey has had since Atatürk. In 1988, Özal was the author of a book in French, published in France by the famous Plon Publishing House, under the title La Turquie en Europe, with the help of Ambassador Gündüz Aktan. The first half of the book was based entirely on the works of Halikarnas Balıkçısı and the second half was based entirely on my works. At the time I did not know Özal but my friend Kaya Toperi, the then ambassador of Turkey to Ottawa told me that Özal admired me and that he considered me his spiritual father. After this publication, Özal invited me to Ankara where I became his collaborator and best friend. Alevism tight us closely together. His entourage was very critical that he had chosen to have at his side, as President of the Turkish Republic in Çankaya, a Greek and a socialist. This, as well as the Kurdish problem that he tried to solve, cost him his life. I was persuaded, already at the time of his death, in 1993, that he was poisoned by the military establishment.
UPA: Professor could you please name some academicians, journalists and politicians that you follow closely and give importance to their views?
Prof. Dimitri Kitsikis: İlber Ortaylı.
UPA: Professor Kitsikis thanks for your sincere answers and friendly look to our country.
Interview: Dr. Ozan ÖRMECİ